A downloadable game for Windows

Don't ! Heroes : Encore!, the post jam version is out ! Please check it out :
https://goomboo.itch.io/dont-heroes-encore

An RPG in a paper world, in which a party of heroes is entrusted with the task of defeating the Void King, heir of all calamities.
During their journey, they will be guided by you...but only if they listen !

During battles, heroes will announce what they intend to do.
You will then have a few second to react to the statement.
If you're ok with it, do nothing and let them do as they want.
But if you aren't...SMASH the « NO » button !
The hero change his mind. But he will be annoyed.
Keep an eye on the annoyance gauge of your heroes.
If it gets full, the hero will get out of control !

Allies may join you on your way... except if you tell them NO !
Good luck !

We didn't have time to make a proper ending to the game. If you manage to kill the big Eye boss, you won the game ! (The fight will unfortunately loop endlessly in game)

Now it wont let me open it or delete it. Help

Imagine Miitopia with this combat system

I would buy it if it is a full game!!

I LOVE the concept of it! Would buy it, were it a full game! :D

id love to see this expanded upon the idea is great!

Aside from the looping end boss, I liked this game. I would like to see an expanded version of it

I'd love to play, but it only runs on Microsoft. It won't work on Linux :c

Y'all made something really cute here! The music is boppin', and the art is really nice. The variety in actions that the party could take felt just right for a proof of concept. Managed to beat the boss twice on the first run.

The Best Thing: Despite only being able to say "no", the flow of each combat felt really zippy! It felt like it took about as long as Paper Mario and other RPGs to resolve a combat.

Room For Improvement: We never had to say "no" enough to make our party unhappy. It was a cute risk, but generally the party was right-on frequently enough to not be relevant.

Some Design Space: Special override abilities, that increase the whole party's frustration, could be pretty cool!

You see, I had the opposite problem. The heroes would allways heal people who had max HP or attack while the enemy was metal, and end up dying. I couldnt do anything other than say no to the point where I would die pretty frequently because of it.

So it seems a bit luck based, judging by this post.

Darn! Hope you still had a good time. The art, general flow of things, and the mitigating factor of it not really being your fault will hopefully make up for it.

With some variation and lots of different actions, speeds and things that can happen, this could be a blast to play through :)

I like the game and I especially like the character designs. I want to draw them, I hope you don't mind.

Hello! Dozen days later but I drew it. I'll leave a link to it here, feel free to check it out:

That's so cute hahaha
Thank you so much !

I know the scope is limited due to it being a jam game, but an option to control the volume would've been nice, the music is just a tad too loud imo.

Loved it, the polish level is crazy! 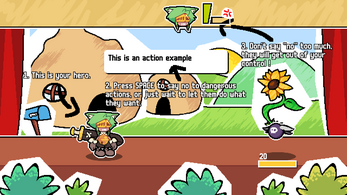 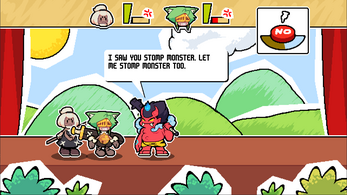 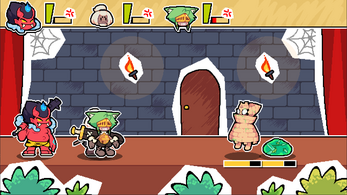